Elements of the Detoxification and Rehabilitation

The reasons why people start to abuse substances may be many, such as curiosity, peer pressure, boredom, the lack of self-confidence or even a secret spiritual longing. Nevertheless, substance abuse can generally be considered as a symptom of a conscious or unconscious deep crisis in one’s life. Alcohol and drugs cover the existential frustration and the anxiety that are linked with it. Moreover, most of the drugs poison the body and create psychological and/or physical dependency.

Long term drug abuse doesn’t only lead to serious problems of one’s health, it also very often leads to a decay of one’s character: will power, sincerity, integrity and self-esteem are little by little sacrificed. One starts to nourish darkness instead of one’s Inner Light.

This inner misery then requires an increased “anesthesia” through drugs. After some time one finds oneself hopelessly addicted.

In Buddhism we believe that one is totally responsible for one’s actions and their consequences. According to Luang Poh Charoen, the physical detoxification is only 5% of the healing process. The client must do himself the remaining 95%. Therefore he must get the chance of confronting himself, in order to reorganize his life. This is one of the reasons why the withdrawal in Thamkrabok is a “cold withdrawal”. The medicine is very effective, but the forbearance and the endurance of the client are challenged! The path often leads through the building up of one’s will power. After some time of serious practice, the insight about what to do in life may appear spontaneously. This is the decisive thing. If you don’t use the potential that is inside you in a good way, it will become destructive.

Elements of the Rehabilitation

The “Sajja” and the “Katah”

If you want to enter the drug-detox area and start with the purification of your body, you will have to go through the ceremony of Sajja. The Sajja is a very essential element here in Thamkrabok. The Sajja is a sacred Vow. Sajja is a solemn declaration about a truth that one will put into reality by one’s action.

Sajja is a sacred act that if you believe in it will connect you with your will power and with something “beyond” that Luang Poh Charoen had called “the whisper of God”.

Breaking a Sajja is considered a very serious thing.

So think well, before you decide to take any Sajja!

If you want, you can get a little paper with a ‘sacred word’ after the first phase of your rehabilitation. It is called “Katah”. You may learn them by heart. You can use it as a ‘snow-plough’ to keep your ‘road’ clean. You can use your Katah for meditation purposes. You can repeat it, when you need endurance and strength, or in moments of craving and temptation. You can also repeat it in moments of danger! You can also bless your food, saying it silently. If you use this very powerful tool well, it will grow and become an effective tool in your life.

Notice: The Sajja is there for everybody. It is not limited to any specific religion or belief-system.

A Strong Herbal Medicine and Vomiting

You will be given a certain amount of herbal brown liquid. Afterwards you will drink a lot of water to induce vomiting. This will take out the toxins left in your body.

The herbal pills are another element of purification. They produce an energizing or a relaxing effect.

Notice: During your stay at Wat Thamkrabok no other kind of medicine is allowed.

The tea offered in detoxification center has a purifying effect and can be taken all day long.

The herbs that are added to the steam are exceptionally good for the skin, the lungs and the eyes. Like the vomiting, the steam bath is a classical element of physical purification.

Notice: Thamkrabok is not a Malaria area.

It has been said that Wat Thamkrabok in Thailand runs “the toughest drug rehabilitation regime in the world”. 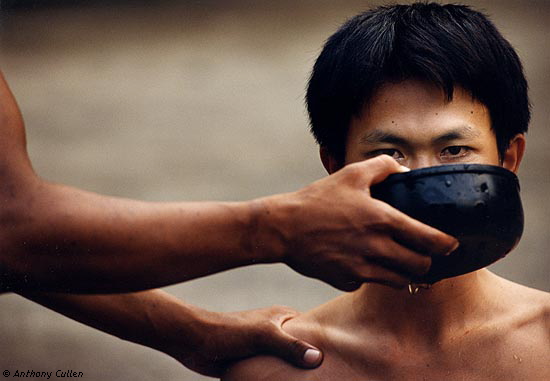 Addicts can only be admitted at Wat Thamkrabok for rehabilitation only once.

You should not go to Wat Thamkrabok until you are certain that you truly wish to be free from your addiction(s) and you are 100 percent committed to being drug/alcohol free.

Before you travel to Thailand you must ask yourself 2 questions:

If you cannot honestly say “Yes” without hesitation to both questions, then it is better that you wait until you are serious about getting well. As one monk famously said “We want only warriors… victims need not apply”.

The Thamkrabok programme is based on Sajja (a sacred vow) not to get addicted to substances. Sajja is a sacred act that, if you believe in it, will connect you with your will power and with something “beyond”. Sajja is there for everybody; it is not limited to any specific religion or belief system. The Sajja is supported by Wat Thamkrabok’s unique herbal medicine that facilitates a very real and very rapid detoxification. You must have a strong belief in your Sajja. This is of the utmost importance.